That was part the talk of the town last week, ‘herd immunity‘. Most countries hit by Corona opted for a lockdown to get the Corona outbreak under control, with ‘harsh’ measures with a massive impact on the economy. The dutch government chose a different approach, with some ‘soft’ constraining measures like ‘don’t shake hands, wash your hands often, keep 1.5 meters distance’ and initially mentionned ‘herd immunity’ as part of their strategy. Later they part retracted that stating ‘herd immunity’ would be a side-effect of their chosen strategy.

What is ‘herd immunity’?

The idea with ‘herd immunity’ is to slow the outbreak to a controlled spread, and when 50 to 60% of the people have been infected with corona, they should be immune and do not spread corona anymore. That way the immune people in time should form a protective shield for the people that are not infected and not immune, especially the elderly.

One constraint is that the government do not want to overload the health care system. We have roughly 1000 intensive care beds, and that is the main constraint.

That all sounds wonderful, until you do the math.

Let’s do the math

Given the constraint that we do not overload the health care system, how long would it take before we reach ‘herd immunity’ ?

I haven’t touched on the subject of immunity itself, there is no proof that people become immune to Corona if they survive an infection with Corona, and there is no data on how long the immunity lasts. With other virusses, sometimes people become short-term immune just for a few months, with others they are immune for years.

But Corona has only been around for 3 months, and there is no data on immunity. As a sidenote, there are already incidental reports of people being infected twice, people that did not become immune.

Given the constraint of not overloading the health care system, we won’t achieve ‘herd immunity’ for the next 20 years, and still there is no actual data on immunity. If people are only immune for 3 months, then it becomes a neverending story and we will never reach ‘herd immunity’.

We are already at half cap with 5.500 infections

We currently have 5.500 infections and 550 people on intensive care, that is not 5% of the infected on special care, that is 10%. The health care system is already at half of it’s max capacity with 5.500 infections. The government have stopped broad testing, they only test the sick elderly basically, and don’t map the infection spread anymore. Anyone could be infected, it is starting to spread uncontrolled. The government did take extra measures : no gatherings of more than 3 people et cetera, but according to some experts, that will not be enough to control the outbreak.

The government said this week would be critical to see if we have enough intensive care beds. This week is not the problem. It is the coming months that are the actual problem. If like Italy and Spain we go from 5.000 to 30.000 new infections next month, and 10% of the infected require special care beds, we would need 3.000 extra intensive care beds, and we do not have that capacity. And that could mean we skip to a 7% mortality rate, with over 2.000 dead next month.

We could still make it next month, by the skin of our teeth. But what after that ? What if we cannot control the outbreak anymore ?

The argument of the Rutte government against the Chinese lockdown approach is that the Chinese are not immune, and could have another outbreak at any moment in time. It seems again the main argument of the Rutte government is that the Chinese don’t have ‘herd immunity’. That is true. But we won’t achieve ‘herd immunity’ for the next 20 years without overloading the health care system (and incurring a 5% extra mortality rate), we would suffer 8.500 to 30.000 casualties per year totalling 170.000 to 600.000 dead on our road to ‘herd immunity’, and again, there is no data, no scientific proof, that shows people actually become long-term immune.

For the moment, the Chinese lockdown seems to have stopped the Corona outbreak in China with ‘only’ 3.200 dead.

Wait for a vaccine…

Any number of companies are working hard on developing a vaccine, and expect to have a working solution within a year, maybe 1.5 years.

That seems sooner the strategy of the Chinese and other countries : control the outbreak, get rid of the virus, and work on a vaccine. That seems the approach most countries are taking : a complete lockdown, harsh measures, testing and mapping, isolating the infected, until the outbreak is under control. And control any future outbreaks, until there is a vaccine. That would mean in about two years we could all be immune.

Money or lives ? Fictions or facts ?

Donald Trump argues that a complete lockdown (and possible economic collapse) would cost more lives than the virus itself. Where is the scientific proof of that assumption ? Show us a calculation ? How did Trump arrive at that conclusion ? Donald Trump just seems to make it up as he goes along, like the Rutte government with their ‘herd immunity’.

Rutte and Trump have assumptions and ideas that they seem to act on without any scientific basis. They are gambling with our lives, and the lives of our elderly and other risc-groups. It seems to me our governments are more interested in keeping the economy running, at the expense of human lives, and drag up all kinds of unproven assumptions to justify their ‘soft’ approach.

With Corona on the loose and our health care systems overloading, we can kiss the economy goodbye. If the Netherlands and the USA don’t go for a lockdown and a complete eradication of the virus, we could well become the ‘pariah’ of the international community for the next years. We won’t be travelling abroad because no country will allow any of our people to cross the border, given the risk of people being infected. Even one infected person can start another outbreak and make another lockdown necessary.

We have an old proverb here, ‘zachte heelmeesters maken stinkende wonden’ (soft physician make stinking wounds), that implies that if you don’t take the necessary harsh measures, you end up with festering wounds. In this case, a lot of severely ill and dead people. There is a lot of wisdom in that proverb.

Cute : these days on 7search the most common searches containing php are openx-ad urls and blocked domain urls. 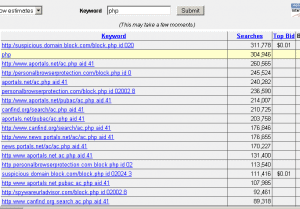 It seems losely connected to a bh-campaign on facebook installing WinPC Anti-Virus. A lot of it comes from referals to aportals.net and canfind.com containing the same error.

A typo in the openX ad campaign I think, HTTP:/ missing one forward slash, causing the browser to dump the url to Google Search. Which then redirects to the WikiPedia definition of HTTP :).

Trackbacks are brilliant stuff. I programmed a trackback module into the trends script yesterday just to see what it yields. As long as you don’t use it to spam and stick to common standards, it’s the fastest deep link building method available. I noticed another trends script is also using trackbacks.

GTrends lists an average 600 different searches per day, that makes 200K pages a year. If you put five blog excerpts with a link on a page you have 1000K backlink opportunities a year, automated, if you use trackbacks.

I got 50% success rate in the first tests, so I put it on a cronjob and it seems to level out at 30% successful links. That seemed a bit much, so I checked the PingCrawl plugin Eli (bluehatseo) and joshteam put together for WordPress. They claim a 80% success rate using Eli’s result scraper, I guess 30% is not aberrant.

For trends, I can’t narrow my search down too much. I need the most recent blogs for the trends buzz. Too narrow searches might exclude the recent news and the script would lose it’s usability. Besides, I figure 10% trackbacks would already be more than enough, a few hundred lines of code with a css template for 100K backlinks a year ain’t bad.

I don’t actually have anything to blog about today, so that’s it.

Can I be honest ? Dude over at seounderworld gave me a vote of confidence on the trends script and I felt embarrased as the demo looks like shit and didn’t do anything. For scraper basics fine, but it lacked seo potential.

So I added some CSS, validated the source, added caching, gzip, rss-feed, sitemap, and the trackback module. It got 300 uniques yesterday and 400 uniques this morning on its first day out, so it performs better now and I don’t feel so embarrassed anymore. 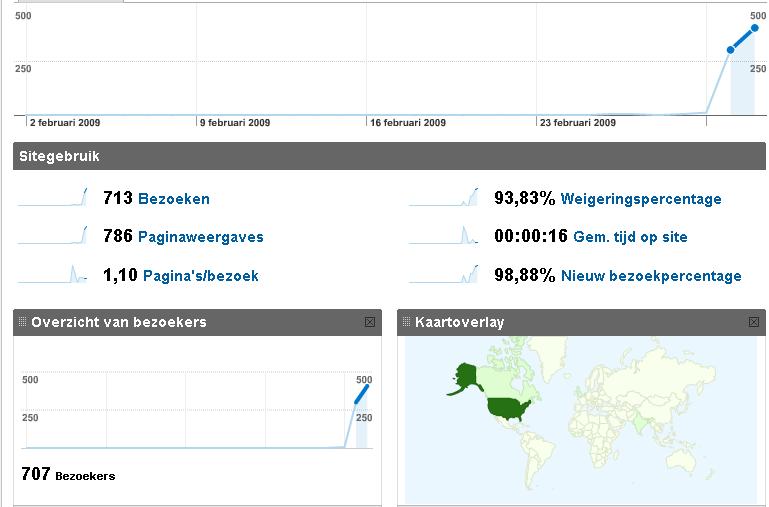 (nice impression of the trends audience by the way)

I’ll add some proxies to prevent bans and some other stuff, once that’s done I’ll refresh the download.